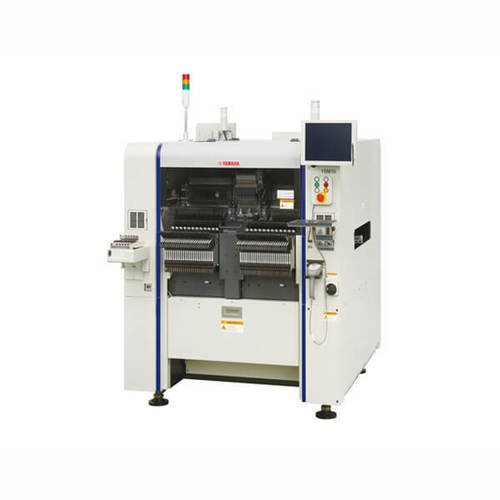 While in pursuit of the ideal concept a 1-head solution with versatility from small chips to large components, the world's fastest speed in its class, and without the need for head replacement - the new model also has a high-speed general-purpose head similar to that used in the Z:LEX YSM20, and a new generation servo system etc. creating a high-class model with the latest technology.

Simultaneously, the specifications of all three current models of the YS12 series have been integrated into one platform featuring the flexibility and mobility of the compact high-speed modular YS12; the partly simplified version of the compact economy-modular YS12P, and the highly-versatile compact modular YS12F.

In addition, pickup and recognition errors are suppressed along with reduced loss in machine stoppage due the integration of the common functionalities of the two high level machines, the Z:TA-R YSM40R and the Z:LEX YSM20 with their e-Vision for automatically creating and tracking component data, Smart Recognition for easily creating component data from complicated shapes, and Pickup MACS system for automatic correction of the component pickup position.

Yamaha Motor is set to exhibit the new YSM10 at the 46th INTERNEPCON JAPAN trade show for electronics manufacturing and surface-mounting technology (SMT), to be held from January 18-20 at the Tokyo Big Sight (Koto-ku, Tokyo).

In recent years, miniaturization, high-densification, high functionality, and diversification as well as shortened product cycles have been accelerated for a variety of products such as domestic appliances, personal computers, and cell phones. In the mounting process for the above types of electronic products, over and above the mass production of a single product over a long time-frame, there is now a requirement for flexibility in order to efficiently accommodate varied production as well as mass production on the same line.

Meanwhile, digitalization and networking of products will rapidly expand due to the spread of IT in automobiles, the expansion of IoT, etc. The mounting industry is expected to further grow with new electronic circuit boards being produced and many companies aiming for entry into the assembly industry. Within this environment, the Company's line-up of the small modular YS12, YS12P and the YS12F which are at the entrance-machine level end, are relatively easy to invest in, being reasonable priced, and popular due to their compactness yet high-functionality and performance. This is a mass-production model that will become the top sales unit in our surface mounter range.

The integration of the three YS12 models consolidated into one platform provides the same high-speed general-purpose head as upper models. The YSM10 has been developed to bring further improvements in both speed and versatility as well as investment efficiency as a compact, high-speed modular entry model for the YSM series.

Based on the ideal concept 1-head solution capable of handling a wide range of components while maintaining high speed without the need for head replacement, we introduced various technologies cultivated from upper model Z:LEX YSM20. By adopting the latest technology such as the same lightweight and compact universal type HM (High-Speed Multi) head as the upper model and the new generation servo system, increases of 25% or more are achieved compared with conventional machines (YS12) in the 1-Beam 1-Head machine class to realize a mounting capacity of the world's fastest at 46,000 CPH (in the Company's optimum conditions) At the same time, it is versatile enough to handle from 03015 (0.3mm x 0.15mm) ultra-small chips to large components of 55mm x 100mm and 15mm in height.

In addition, by improving the performance of the scan camera, we have expanded the range of component size compatibility for high-speed mounting from 8mm to 12mm, further enhancing real productivity.
Although the standard HM head is a ten-nozzle based specification, the HM5 head with 5 nozzle specification is also available and can be selected according to the production type and budget.

A range of options are available for selection including the sATS15, an automatic replacement type tray component supply device, the ANC, an auto nozzle station capable of automatically changing nozzles, the multi camera which recognizes components exceeding 6.5mm in height or over 12mm square in size at high speed and high precision. This machine can flexibly adapt to a range of circuit board sizes and mounted components.
The tape feeder is supported by the electric intelligent feeder SS feeder and ZS feeder used in the YS series.

Pickup and recognition errors are suppressed along with reduced loss in machine stoppage due the integration of the common functionalities of the top machines of the Z:TA-R YSM40R and the Z:LEX YSM20 with their e-Vision for automatically creating and tracking components data, Smart Recognition for easily creating components data from complicated shapes, Pickup MACS*1, the component pickup position automatic correction system, and CE marking*2 to ensure safe device design. 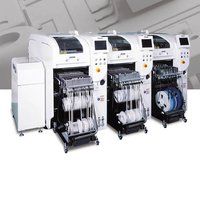 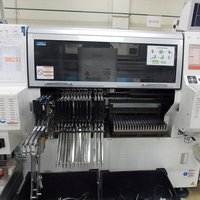 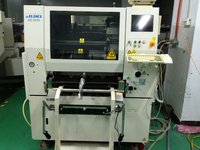 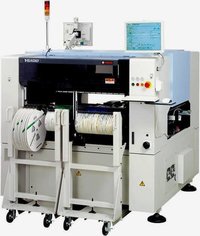 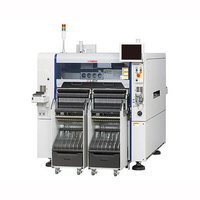